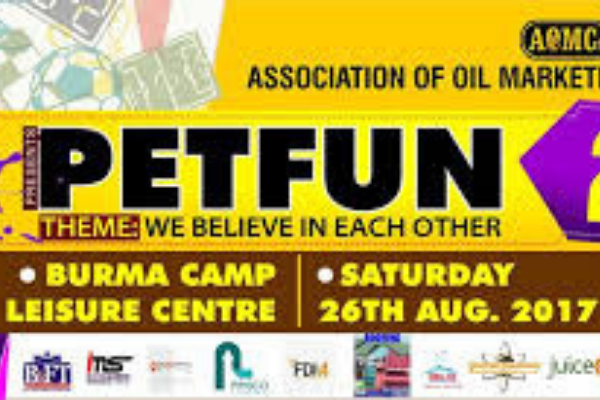 The Association of Oil Marketing Companies (AOMCS) has wrapped up the 2017 Petroleum Fun Games with outstanding performance from Kabore Oil Limited sweeping five trophies and one first runner up trophy as well.

Kabore took away the Football, Lime and Spoon, Ludo, Draught trophies as well as the first runner up trophy for the Playing Cards and iced the good day with the Best Performing Team trophy, at the 2017 PETFUN Games held at the Burma Camp Leisure Center.

The PETFUN organized by the AOMC was to create an opportunity for Oil Marketing Companies (OMC) to drop their traditional business war and put on a new garment to engage in friendly hostilities on the playing field loaded with fun.

Other winners were: Ghana Oil Company Limited (GOIL) who disappointingly picked only the Table Tennis trophy, Puma Energy Limited also struggled for the Volleyball trophy, whilst the National Petroleum Authority (NPA) once again exerted their will power in the Tug of War competition disposing all opposition to pick the trophy.

The 2017 PETFUN also witness dramatic exposure of product branding, glamour and beauty, dexterity of scores of NPA ladies who added tonic to the fun with a chorographic performance on the sidelines whilst scores of some ladies were in titillating sports outfits for the beauty of the game.

The various OMCs also invaded the center with scores of brass band and cheer groups which created a harmonious musical and dancing disorder.

The Best Female Participant gold medal went to Ms Laila Zangvio of NPA, and the Golden Boot award was picked by Mr Asamoah Boateng of Kabore.

Other silver medallists were: Frimps Oil Company Limited picked the Draught, and Cirus Oil Company Limited took the Sack Race.
Mr Kwaku Agyemang-Duah, AOMC Industry Coordinator told the CDA Consult in an interview that the annual PETFUN was to create avenue for staffs to exercise their bodies through fun for healthy living.

“Management should not only focus on increased productivity to push staff to the ultimate but the welfare of staff should be paramount as a healthy person is well motivated to produce with little or no supervision and motivation.

“The bane of most corporate managers is the neglect of the welfare of staff, poor working environment, creating of ivory towers where they hide and operate from as well as lack of motivation,” Mr Agyemang-Duah stated and called on those in the formal working environment to engage in regular bodily exercises.

Mr Kwaku Agyemang-Duah, AOMCs Industrial Coordinator commended the Oil Marketing Companies who participated in games and noted the need for oil marketing companies to build bridges and establish stronger network with other stakeholders across board.